We're home, and have have recovered.

It wasn't that bad for me as it was only a hygienist appointment this time. Although it was probably about twenty years since the last one. My dentist used to do the scritchy scratchy scraping bit, followed by the high speed tickly toothbrush stuff, but he has retired and things have moved on.

I felt fine (ish) afterwards; not so for Himself. He came out from the hygienist in reasonable good order, but went straight into the dentist for the first of several sessions to rectify a series of problems.

He was only in there for three quarters of an hour, but it has taken quite a while, and a couple of pain killers, before he was ready for a late lunch. Very late. At 5pm.

Ah well. We shall put this all behind us and wait for chocolate o'clock, when we open the special box and have a little bit if chocolate each. 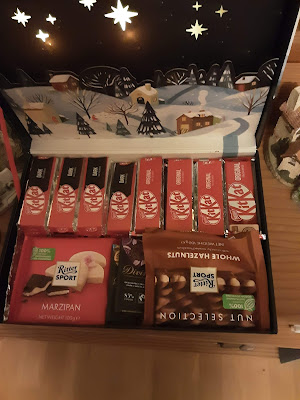 Oh joy! It has been restocked since I last looked!

(When is chocolate o'clock? Sometime after tea, whenever we decide)