OK. The keyboard re-arrangement on my laptop is fixed! But I'm using the "mainframe" for convenience and speed.

The book is called "A Gentleman in Moscow" by Amor Towles; I'm enjoying it, but find it needs to be read in small portions. Why? I'm not sure; perhaps it is many-layered and dense and vivid and idiosyncratic?   Anyway, it is the current book club choice. So far the book club is doing exactly what I had hoped - introducing me to all kinds of books which I wouldn't have thought of reading.

Anyway, back to the random sightings....

On Thursday night I thought I met a train coming down the steep hill that I was driving up to get to the school show. The hill is steep, the lane is narrow, the trees grow closely overhead and this huge, brightly-lit unidentifiable method of transportation came thundering down towards me, using a good deal of my side of the road. Once I had recovered from a simutaneous sudden dive towards the earth bank at my side of the road and application of brakes, and then rapid change down several gears and got the Corsa moving again, I was able to process what I had seen and conclude it was some kind of truck. Ugh.

Today, after work (yeah, some of us work on Saturday mornings, but this is the last until September whoop whoop) we were pondering where to go for lunch. He came up with "Lamingtons" in Bletchingley-  we were there about this time last year (17th June - I've just checked). It was only half an hour away, (through some of the beastliest lanes we have driven down in a long, long while - memo to self, don't follow the satnav through the back ways) just as we remembered it. He had smoked salmon and scrambled egg on toast, I had home-made quiche and salad.

Then, where to go next? Downe House, where Charles Darwin lived, is only half-an-hour away from Bletchingly, so we went there (down little lanes which require a whole new scale for beastliness - eroded verges, potholes, lack of passing places... I hadn't written myself that memo re satnav yet).

On the way, I spotted a Darth Vader mannequin in an old-fashioned telephone box - in Westerham, should you wish to check it out. The first link gives you the Westerham page - it seems Father Christmas is in residence. The second link gives you the google maps page - it's called Verrall's Corner on the A25. I couldn't get a picture of Darth Vader - the lights changes, and anyway it was all dark in there. It was a lady in a blue frock (the Queen?) on the day the google van went through... 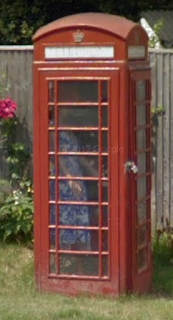 Down House was very interesting - the house, the contents, the Darwin family. I even bought a guide book. You'll get much better pictures than this on the English Heritage website. 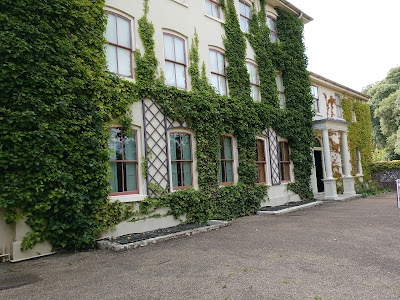 "The house is old and ugly" said Charles. But it had a great atmosphere.

The ground floor rooms are as they would have been when the Darwin family lived there, and upstairs an exhibition of Darwin's life and work. There were phrases of his "origin of the Species" on the walls - his descriptions were delightful. Also, he hated the sea.

I'm sure we used to play Downe House Girls School at Lacrosse when I was at school - well, not me, I was useless at lacrosse. The school is in Newbury now, but started here in Charles Darwin's house in 1907, after the family moved out.

We had tea and cake; I loved the little ants marching over the spoon marking the table number. 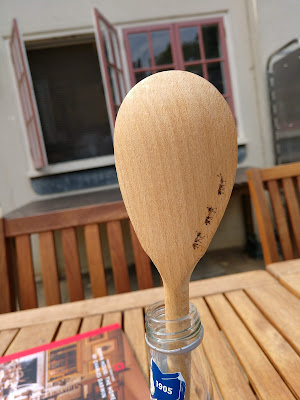 I don't think I have eaten zucchini - or courgette as I would have said - cake before today. This one had a lime and pistachio nuts and was delicious. 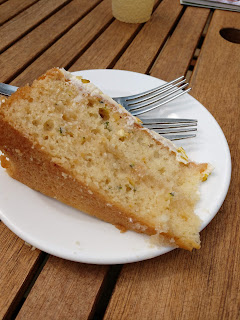 And in the spirit of Natural history, this tiny feather was caught on a roughness of the table; just a blur in the photograph, but a glorious miniature of yellow and green and grey in reality. 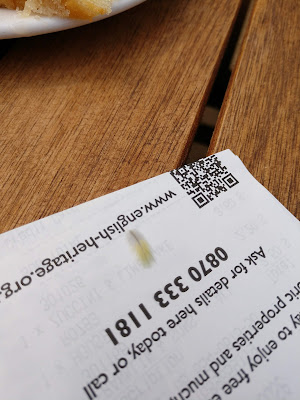 We came home through main roads, A roads and motorways. Took a scant hour and was a lot less taxing than the outward journey.