I've dragged myself through this week - the cumulative events of this month have had their cumulative effect... I feel as though


I have measured out my life with coffee spoons;

Book club on Monday - this was the Church one where we read a book of the Bible over the course of a month, then meet over supper to discuss. The other table was busily flipping through the pages of a Bible and clearly having an animated discussion about St John and the Gospel. Our table dispatched the topic quite quickly, and then we three ladies fell silent in amusement as the two gentlemen discovered their mutual passion for model railways...

I'm following the www.futurelearn course 'How to read a novel' (there's a lot more to reading a book than just starting at Chapter One and carrying on until the end, it seems!) - last week's topic was on the different types of narrator, and 'unreliable narrators' in particular; perhaps I shouldn't have opened the discussion by asking of John could be considered an 'unreliable narrator'...

What has kept me going, as I plodded home, staggering under the weight of my back pack, after a day of teaching at the local primary school, like the Ploughman who

has been spotting the flowers; I have seen anenomes, camelias, narcissus, hebe and heather. All a bit unseasonal for mid-January, and all very welcome. I am sure that a Weeping Willow on the road into the town has actually come into leaf all already.

I need to check the weeping willow next time I tootle past; but I can't give as much attention to the verges as I used to, now that I am driving the Panda instead of the Alfa. It is a sweet little car, even though I keep thinking that there is a dinette and kitchenette behind me, rather than just a back seat, but it is not as good at driving itself in a straight line as the Alfa was. I've been caught out when trying to get a good look at something interesting, and then finding that the car is taking the opportunity to try and have a look too, instead of following the road.

The amaryllis is growing at a prodigious rate; it was just a bulb two weeks ago. 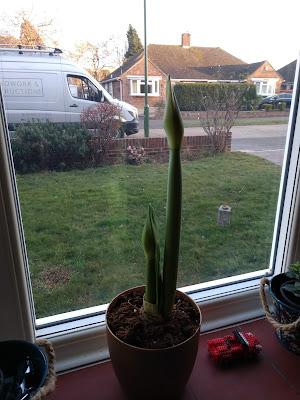 And these iris bulbs were Very Dormant when I put them in the cupboard at the same time; they have to stay there for ten weeks, poor things. 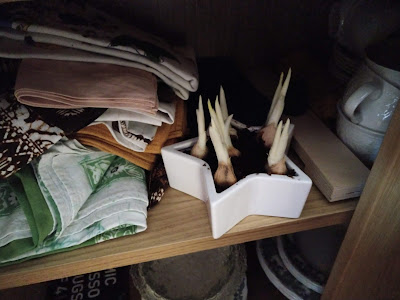 These little kalanchoe rootlings, planted up before Christmas, look as though they are going to burst into cheerfulness soon too. 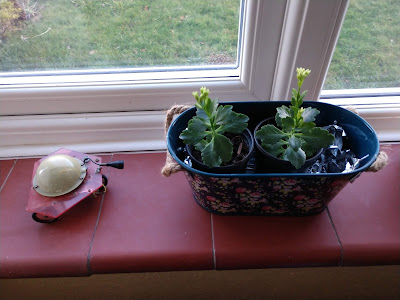