I thought yesterday was the hottest day of the year, but it turns out it's today.

I've had a very pleasant morning - a piano teaching friend and colleague dropped by on her way to work. She's still teaching in schools as term hasn't officially ended, but had time for a breakfast cup of tea before her first lesson at about ten.

And then another friend came round for coffee as arranged last week.

In the Spring it is a bit irritating that the sun doesn't reach the patio near the house until very late morning. At Mid-Summer this might be around eleven. Now, in July, in this heat, I am grateful that this area was still shaded at noon, even if it was warm enough for all the chocolate chunks in our biscuits to have melted.

I was wearing the blue dress I made earlier this year. As usual, instead of making up the next Summer dress in June while the weather was miserable, so I could wear it in July when the heatwave the tabloids have been warning us about hit, I waited for the hottest day of the year. 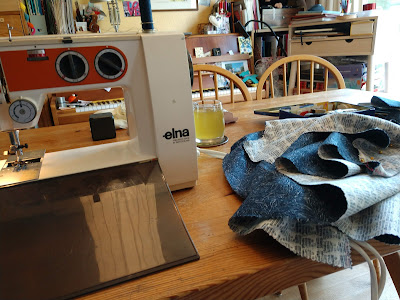 So while lunch was being prepared by my wonderful husband, I set to work.

The glass in the background contains cold tea - just steep a mild teabag in water overnight, in the fridge. I use green tea or white tea, and try and buy the kind of teabags that don't contain any plastic (you can't tell just by the feel of them) so that they can go in the compost.

I'm still having to extract the remains of all the Twinings and other teabags I threw in the compost bin a couple of years ago. It's a bit like when you eat sweetcorn - the evidence re-appears...

Anyway, I am wearing the completed dress that I started this lunchtime, having finished it, washed it by hand to remove any loose dye or coating that might have been used in the manufacturing process, and hug it out to dry. In this heat, and in a light breeze, it dried in an hour.

It is the same pattern as the other dress, but I left off the sleeves. I discovered some ancient bias binding in the bottom of the sewing drawer which simplified my life considerably!