There are three doors in the hallway; the front door which is fairly new, and the doors to the kitchen and sitting room, which are probably original dating back to when this house was built, in the 1950s.

The door handles on the interior doors had gone from being a bit imprecise towards non-functional. It was becoming increasingly difficult to persuade the sitting room door to stay closed, and for the kitchen to to agree to be opened. 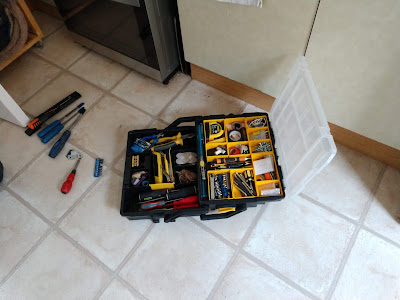 Bitter and frequent experience with this house and the running repairs means that the first thing is to fetch out the c9mprehensive toolbox, never far from hand.

A bit of chiselling, a bit of joggling and fettling, a generosity of WD40 and both doors are working as they should, opening and closing sweetly and smoother.

Still with the squeak, though. That would have been a major dismantling of the lock, and we don't mind the squeak that much.

Email ThisBlogThis!Share to TwitterShare to FacebookShare to Pinterest
Labels: improvements