I first encountered labyrinths when I was at boarding school. Church on Sundays was compulsory, but we could choose which church we went to, so long as we went in pairs and were back for lunch. On sunny Sundays in the Summer term, my friend and I used to choose the church of St Cross. It was a long walk through the water meadows but that didn't matter as we had no intention of going to church at all, but climbed to the top of St Catherine's Hill instead. We would lie on the grass, hidden from any school teachers who might be out walking their dog, and listen to the crickets chirping and the larks ascending. If we stayed too long, it would mean a brisk jog back to avoid being late for lunch, but we always trod the "Mismaze" labyrinth gouged out of the turf at the top of the hill before we left.

Many, many years I was planning a - I hate the word banner - but I guess I have to use it - a banner then, for church on the theme of "Walking with God". I thought of a labyrinth, a common design for expressing the Christian Life. The point is that there are no wrong turnings or blind alleys in a labyrinth, so if you just keep going along the path, you will certainly reach the centre, unlike trying to solve a maze. I found that I could bend the basic rounded shape of the labyrinth into the shape of a cross.

I cleared an area of the church to create enough space to put it together, using calico as the backing, and gluing lengths of cotton bias binding tape onto this to make the lines of the labyrinth. The background was made by layering coloured net to suggest the grass and sky. 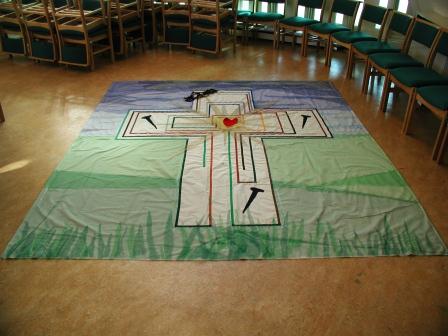 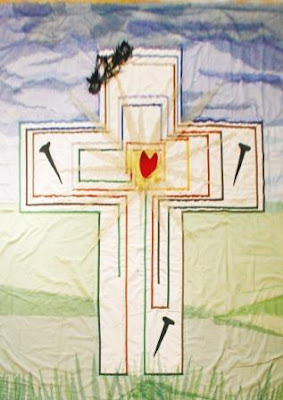 The entrance to the labyrinth is wide, but the paths change from narrow to wide along your journey. Sometimes the space is so broad that you can get lost, lose your way, and end up going backwards. Other times the path is very narrow, and if you are  not paying attention you will cross over into the neighbouring channel which may well lead you in the wrong direction.

There are places where the edges seem to blur into the space outside, and you can stray away from path, leaving the labyrinth altogether.

As you travel along the path, on several occasions you will find your way obstructed by the crown of thorns, when it becomes difficult to keep on going.

At the centre of the labyrinth is the heart of God, over flowing into the adjacent spaces.You will feel its warmth quite soon when you enter the labyrinth, and occasionally the way leads you close to the centre. At other times the path seems far away from the centre, often going in what appears to be totally the wrong direction. 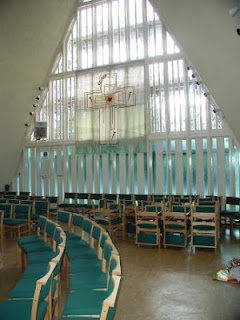 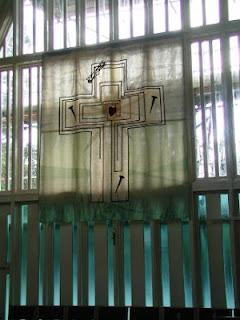