A real-time post - the events as they are happening.

It's still broken. You never got to hear chapter 2, nor see the photos, because one can't blog about EVERYTHING. There has to be a stop point, some when, usually around bedtime. (Last night it was when it became clear that Someone was going to have to cook something for supper NOW. Right Now.) 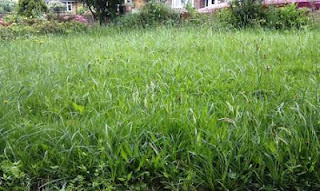 The lawnmower started sounding sick last Summer, if one wanted to be brutally honest. In fact, last Autumn might have been a good time to sort things out, but it went into the lawn-mower-sized space in the garage and stayed there. Out of sight, out of mind. Life moves on. Harvest. Christmas. New Year. Cold January. Miserable February. Easter.

Aaargh! Summer! Grass growing and mowing! Chapter 1 of the saga is here; worth pursuing only for the sound clip of the horrible noise it was making - the mower's website obligingly has recordings of sick lawnmowers.    http://www.briggsandstratton.com/support/frequently-asked-questions/Why%20is%20my%20new%20engine%20hunting%20and%20surging/

Chapter 2 happened after the first box of bits was delivered from the mower website; a diaphragm, I believe - I know several places where you might find a diaphragm (one is constantly trying to use it properly when singing, and the ones on our ancient Mission loudspeakers are perishing) but I hadn't realised that lawnmowers also had them. Son and father "enjoyed" some bonding time in the sun over the Jubilee weekend, and the result was that half the back lawn got mowed before the next bit broke.

Chapter 3 began with sound of someone drilling out pop-rivets in the kitchen; beleive you me this is a noise from hell, causing exquisite distress to anyone who had been enjoying a quiet morning in the sitting room. This was followed some time later by a short burst of mowing, thanks to the fitment of a new carburettor. The activity was short lived; the mower wants more attention (it is very needy, making up for all the years of neglect, I suppose.) 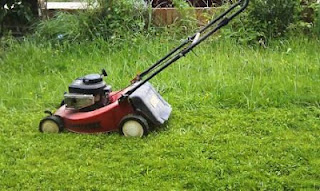 I am half hoping that mowing might be over for the season. Our front "lawn" looks really pretty to my eyes; buttercups and "granny-pop-out-of-bed" (plantains) and coltsfoot and clover and tall, wavy grasses and vetches and things I don't know the name of. It is quite a contrast to our neighbours' patch; they are keen gardeners and are out there mowing and clipping and edging and weeding and deadheading at every opportunity.


I'm glad I took the photo of the meadow before I started typing. After the first three swathes of grass were reduced to stubble, the mower temporarily packed up, but its going again now. Don't know whether to be glad or sorry. Reckon the neighbours will pleased, though. 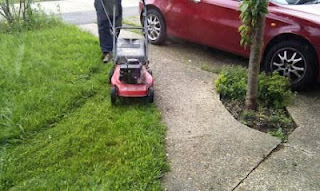 Postscript; In spite of all the lawnmower's desperate attempts to avoid the work, it has been coerced into starting enough times to start the job (leaking o-ring - at least that's only pence, not punds, but requires a major disassembly). It won in the end; I'm sure it deliberately hurled itself at a lump of something or other buried in the long grass at the bottom of the garden - clunk! thunk! and that's that. Husband has appeared, hot and cross and needing a cup of tea. Lawnmower wrangling is not his favourite activity.
Posted by KirstenM at 14:40:00

Email ThisBlogThis!Share to TwitterShare to FacebookShare to Pinterest
Labels: down, gardening, lawn, not out, patience, saga, sigh, techy stuff