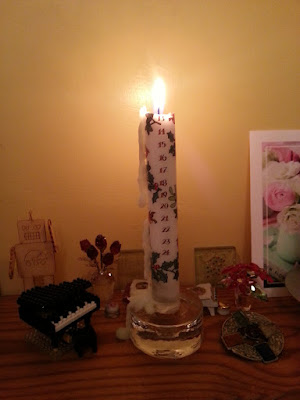 Today was the day of the Christmas Party at the Nursing Home. All week my mother had been adamant that she was going to stay upstairs and have nothing to do with it, but when we got there, we found her dressed, and being transferred into her electric wheelchair. She appeared, dressed, made-up, wearing her wedding and engagement rings and a pair of light-up Christmas Tree ear-rings which I had brought in.

We sat and watched the festivities. Coming down was a good idea as there was a lot of coming and going and plenty of people to watch of all age (including a boy from one of the classes I teach - we were both very taken aback to see each other!).

I wish I been quick enough to capture the expression on my mother's face when someone put a battery operated Singing Dancing Christmas hat on my father's head. The picture I took really doesn't do it justice!
﻿﻿﻿﻿After an hour or so, my mother was obviously tiring, but stayed until the end of the raffle (won two prizes) and then took herself off to bed for an early night.

I was watching too; what I have noticed since her stroke is that when there is an occasion, like visitors, or some kind event, or outing, she will always make the effort to rise to it. She will, through sheer willpower, use her inner strength to make it go well. This afternoon was such a time, and I could see her doing her best.

I was also watching the staff, and I was very reassured by the level of care and attention given to all the residents, and the friendly relationship between all the staff and the visiting families.