I'm writing this on Wednesday 10th.

I haven't written earlier about my mother's funeral because it's been a bit non-stop since then. I've a quiet half hour now, when I've time and energy and "groundedness" to be able to put words into a coherent order.

The funeral was late afternoon, 4pm, and plenty of people came - how lovely to see you all! Thank you, especially the cousins who struggled with railway chaos to get there, (and commiserations to the cousin who was defeated by the railway chaos and had to turn back).

I felt that it was a warm, loving affair, in keeping with my mother's nature. I'm not going to go into details, so if you want to know more about the service, or receive a copy of the sheet, get in touch.

As we came out of the chapel, we were greeted by a friendly, well-mannered cat! That was a surprise. It walked among us in a stately, suitably serious way, providing a bit of light relief to us cat-friendly-people, and a neutral topic of conversation. Well done, cat.

The flowers were beautiful: a big spray from all the family, and a wreath from my mother's oldest friend from kindergarten days.


﻿ One of the bearers removed the cards and handed them to me with a rose - and I thought - why leave the flowers there to fade and wither? So we all helped ourselves to the roses, freesias and tulips out of the big spray. My cousin said that she had taken the wreath from her father's funeral, and enjoyed at home for several days, so I did the same. I put the roses from the family flowers in a vase and left it with my father. 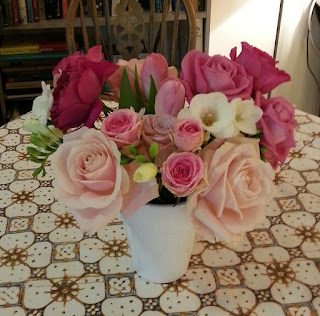 The wreath looked a bit - wreath-like? - on my dining-room table, and a little difficult to explain to all the piano pupils that come and go. 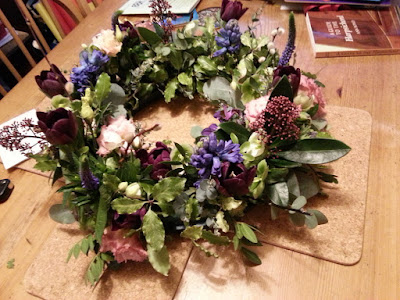 So I pulled the flowers and greenery out, and arranged them in a dish instead. The scent of the hyacinths is now filling the room. ﻿ 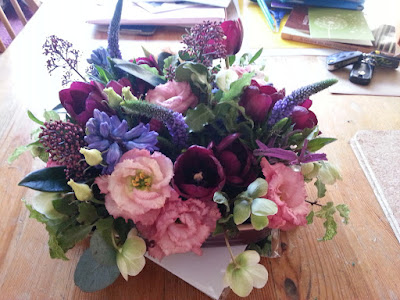 Flowers were such a part of my mother's life - it seemed entirely appropriate to bring them home rather than walk away.