I haven't got the recipe sorted yet:

something along the lines of

I've always kept a couple of vanilla pods in my caster sugar jar, because my mother did. Smells wonderful. Mummy said that this new-fangled fad of paying inflated prices for small packets of "vanilla sugar" was ridiculous...

Rub all together until it forms a ball, adding more flour as necessary.

You can then carry on by

rolling out the dough and cutting out biscuits, not too thin.

or shape round discs by hand, and then, with the back of a floured fork, make one set of lines going north-south and another going east west, making a sort of criss-cross pattern where they overlap

or form the dough into a fat sausage, wrap in cling film and chill. Once firm, cut slices slightly thicker than a pound coin

or, divide the dough in half. Add enough cocoa powder to one half to make it a satisfactory chocolate brown. Roll out both pieces the same size, place one on top of the other and roll up like a swiss roll. Cover with cling film, chill, and then carry on as above.

Whatever you end up doing, cook them on a baking sheet lined with paper for around 14 minutes at 190C (375 F). Leave for a minute, and lift onto a rack to cool.

They should look like this, tinged with gold round the edges and paler in the centre. Maybe these are a bit on the pale side. 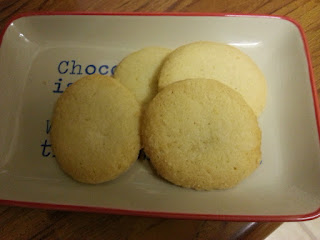 ﻿
The advantage of making the dough into a cling-film sausage is that it can live in the fridge for a while, and any time you want some biscuits you can have fresh, warm ones, straight from the oven for very little effort.

Mummy was taught to make them by her Tante Martje, years and years and years ago. Seventy-five years ago? Who knows. I remember the recipe written in Dutch on the inside cover of her Dutch cookery book (the one with a black and white stripy cover, long gone now.). A soon as I was old enough, she taught me to make these biscuits - I can remember the astonishing mess the kitchen would get itself into whenever I was baking. Now I am teaching my food processor to make them. It is beginning to get the hang of it. It is slightly less messy than the hands-in-the-bowl, dough-stuck-to-the-fingers, flour-all-over-everywhere method.