At least, that's what number One Son remarked when we spotted this 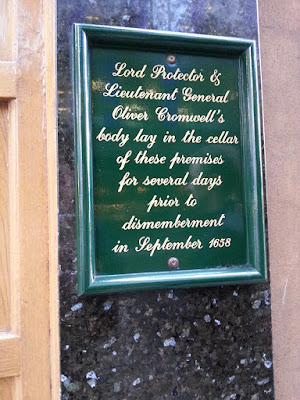 on the wall of "The Red Lion" in Red Lion Street, London.

My knowledge of Oliver Cromwell is very sketchy - Charles the something and another Charles, an Oak Tree, Roundheads and broad lace collars, No Christmas, Speed Bonny Boat Like a Bird on the Wing, and, my favourite, courtesy of Benjamin Britten and Peter Pears;

Now for some "real" facts, from Wikipedia:

Cromwell is thought to have suffered from malaria and from "stone", a common term for urinary/kidney infections. In 1658 he was struck by a sudden bout of malarial fever, followed directly by illness symptomatic of a urinary or kidney complaint. The Venetian ambassador, who wrote regular dispatches to the Doge of Venice in which he included details of Cromwell's final illness, was suspicious of the rapidity of Cromwell's death.[105] The decline may also have been hastened by the death of one of his daughters, Elizabeth Claypole, in August. He died aged 59 at Whitehall on Friday 3 September 1658, the anniversary of his great victories at Dunbar and Worcester.[106] The most likely cause of Cromwell's death was septicaemia following his urinary infection. He was buried with great ceremony, with an elaborate funeral based on that of James I, at Westminster Abbey,[107] his daughter Elizabeth also being buried there.[108]

This doesn't match up with the plaque on the pub at all! But, reading on, from

which is all about Oliver Cromwell's head, we learn that

Cromwell's body, hidden in the wall of the middle aisle of Henry VII Lady Chapel, took effort to exhume because the wood and cloth were difficult to shift. On 28 January 1661, the bodies of Cromwell and Ireton were taken to the Red Lion Inn in Holborn, joined the following day by the body of John Bradshaw, before being taken to Tyburn for execution. On the morning of 30 January 1661, the anniversary of the execution of King Charles I, the shrouded bodies in open coffins were dragged on a sledge through the streets of London to the gallows, where each body was hanged in full public view until around four o'clock that afternoon.[12] After being taken down, Cromwell's head was severed with eight blows, placed on a wooden spike on a 20-foot (6.1 m) pole, and raised above Westminster Hall.

On the whole, back then, if one was to be executed, it is clearly much better to have died first.


By the way, I'm astonished that Winston Churchill was so tactless as to want to name a Royal Naval Warship after a King-Killer:

Cromwell controversy continued into the 20th century. As First Lord of the Admiralty before the First World War, Winston Churchill twice suggested naming a British battleship HMS Oliver Cromwell. The suggestion was vetoed by King George V, not only because of his personal feelings but because he felt, given the anger caused by the erection of the statue outside Parliament, to give such a name to an expensive warship at a time of Irish political unrest was unwise. Churchill was eventually told by the First Sea Lord Admiral Battenberg that the king's decision must be treated as final.[138]

Especially after this had happened some time earlier:

In 1875 a statue of Cromwell by Matthew Noble was erected in Manchester outside the cathedral, a gift to the city by Mrs. Abel Heywood in memory of her first husband.[133][134] It was the first such large-scale statue to be erected in the open in England and was a realistic likeness, based on the painting by Peter Lely and showing Cromwell in battledress with drawn sword and leather body armour. The statue was unpopular with local Conservatives and the large Irish immigrant population. When Queen Victoria was invited to open the new Manchester Town Hall, she is alleged to have consented on condition that the statue of Cromwell be removed. The statue remained, Victoria declined, and the Town Hall was instead opened by the Lord Mayor. During the 1980s the statue was relocated outside Wythenshawe Hall, which had been occupied by Cromwell's troops.[135]