It may look to other people that the past months of my mother's final illness, her death, the funeral, the clearing up, are behind me.

These ornamental cabbages and primulas were bought last November as a back-up plan for their 60th Wedding Anniversary Plans as possible table decorations at their Grand Tea Party. 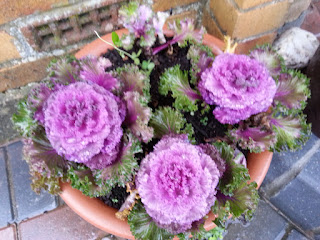 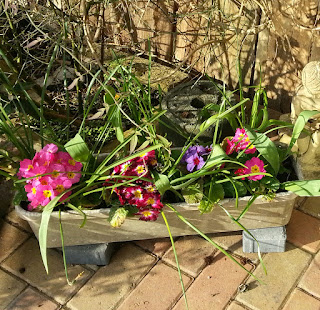 They were not needed after all, so I planted the cabbages in pots outside the front door, and the primulas were stuffed into troughs which already had bulbs in them from last year 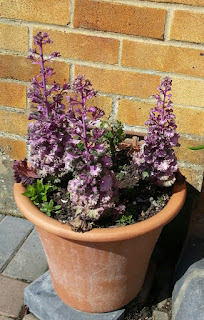 The cabbages (the ones that weren't eaten by slugs) are now bolting, and have turned from elegant rosettes into ramshackle pagodas.

So, there they are - at my coming in and my going out - a little twinge of memory.

She was a great cooker of cabbages, my mother. Actually, she was a great cook. At the convent prep school I went to, they had acres of huge red cabbages in the vegetable garden. The sight filled me with despair. I knew that they would turn up at lunch time, boiled to a despondent murky grey. At home we had delicious red cabbage braised in butter with apples and onion and cloves red currant jelly and brown sugar and vinegar long before Delia Smith had ever educated the British public on the proper way to cook red cabbage.

Green or white cabbage should also be braised in butter, with bacon bits and maybe a touch of caraway seed.

Sauerkraut comes in jars - dead easy. You just need several different kinds of pork - cops, or belly strips, fried and the fat and juices used to make gravy, smoked continental boiling sausage, a chunk of boiled bacon, and floury boiled potatoes. Oh, and the sauerkraut, zapped in the microwave. And German mustard. Beer maybe, to drink. Rennies for afterwards. Difficult to make for less than a whole household.

We used to have Bratwurst-mit-sauerkraut-und-senf in bread rolls when we were ski-ing, for lunch.

I'll be replacing the ornamental cabbages in the next week or so. I plan to plant all the primulas and bulbs under the hedge at the bottom of the garden, where they will get morning sun next Spring, and see if they come up again. I was going to do that after lunch today, but the sun went in. Now, at half past five, it's sunny again. That's how it goes.