Just one week before the end of term. Four days, not even a whole week.

Yesterday, Saturday, I taught my last ever keyboard ensemble sessions - for which I am mighty thankful. They have been extremely hard work and I really struggle with the little concerts/presentations to parents at the end of each term.

Afterward we hurtled along the roads to visit daughter's new flat (very nice, I'd be happy there myself if it wasn't up all those stairs). It is made from the attic rooms in what was quite a grand Victorian Villa, converted into five flats.

The first part of of the week ground on in the way that the final weeks of term tend to. Too much teaching, too much all-in-mental-wrestling with smart-alec ten- and eleven-year-old boys, will be my memory of this term. I amused my self by writing some sample reports, but in the journal that Never leaves this house, and the contents of which Never appear on the internet. So you will have to use your own imagination.

In between times, I finished reading the book club book ready for the meeting on Easter Monday 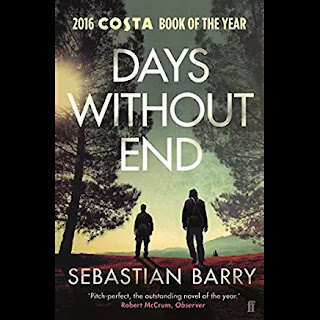 which was a fascinating read. The story is good, but it is the writing style and the language and the choice of words that has filled my head.

I'm also knitting. The blue jumper is waiting for me to get round to casting off the ribbing; I need to learn a special stretchy method and don't have the brain space at the moment. The yellow jumper is at the sewing up stage, and again, I've not enough concentration to risk tackling that.

So, I'm doing something that I've wanted to do for ages; knit a kind of cheat's fairisle, using yarns that change colour. I picked a grey/black colourway, and a multicolour, and just knit whatever pattern I feel like until I've enough for a scarf. I'm very pleased with how it is going. The two yarns started with tawny and grey (not enough contrast in tonal value, perhaps), but improved as I went along. 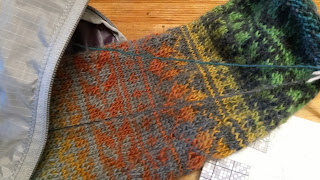 I struggled quite a bit with the dark green/black pattern. (The one that is hidden so you can't see it properly.) It is a sort of baroque curlicue pattern. In the end, the only way I could work out how to remember what colour came next was to turn the chart into  a song; 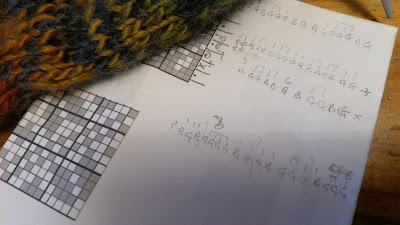 which is what the pencil marks on the chart sheet are. I sort of sing the pattern (in my head, obvs. I wouldn't want anyone to think I was mad) as I knit.

I think I got the tune wrong on one row - I shouldn't have tackled such a complicated pattern this close to the end of term - so my curlicues are slightly more idiosyncratic than intended.

Oh, and I finished the Autumn Story. Little Primrose is safe home, in spite of foolishly venturing into a maze of tunnels. Tunnels and caving and lost in the dark underground have always been too scary for me. 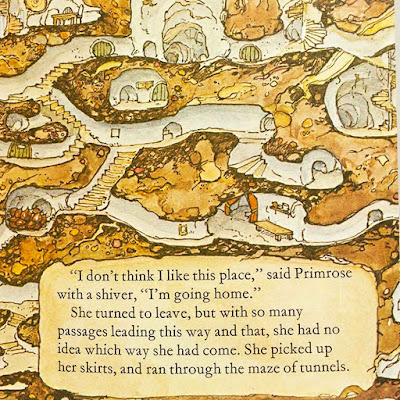 And mazes, any mazes with walls or hedges where I can't just walk over the top to get out. Ugh.