Tuesday was a strange day - we were all set to wait in for most of the day as the engineer was coming to service the oxygen machine and, as usual, we had an 'all-day' slot. We were also expecting a pharmacy delivery, but I had been able to arrange an evening time to free up the day.

In the event, the engineer had finished by about half past eleven, including being recalled by us because he had damaged the clip fastening the thingy to the whodjit; luckily he had a spare thingy in his van so that was all ok.

After yesterday's exertions I felt shattered; however I was gently coerced into the car and we drove to East Beach in Littlehampton through sunshine and clouds and sunshine.

It was proper English Beach weather. There was a fairly purposeful breeze blowing, so some people wore coats, others cardigans and the rest swimsuits and short shorts. It was amusing to contrast this beach; 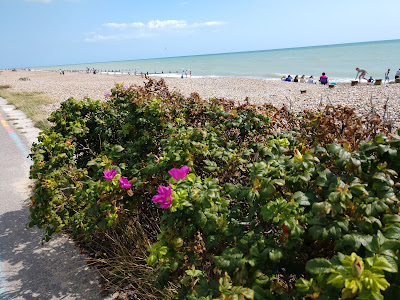 with beach we sauntered past on our walk along the Thames on Monday; 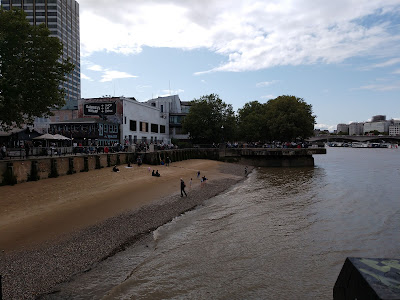 Admittedly, I snatched the London photograph when the sun was temporarily in the clouds, but in both places there were families and buggies and buckets and spades and children digging to Australia. The Londoners were better off for digging; at least they had sand to work with. 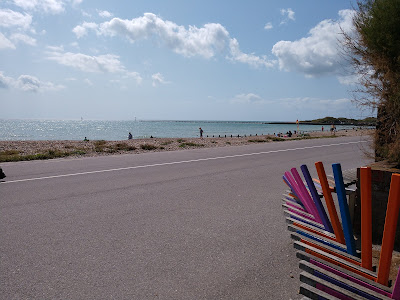 We paused in our post-prandial promenade, sitting in the sun on 'the longest bench in England', which you can just see in the bottom right hand corner of this picture.

What a good idea, getting out and about instead of mooching at home.

When we got back, Leo was having another go at her jaw. We phoned the vet, and got an appointment for later in the afternoon.

Meanwhile, the dentist phoned and asked if Himself could manage to come in tomorrow instead of next week for the hygienist, to help with re-scheduling another patient. 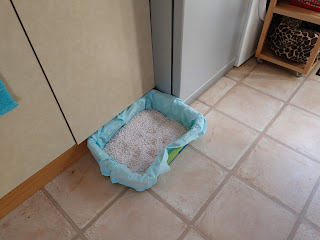