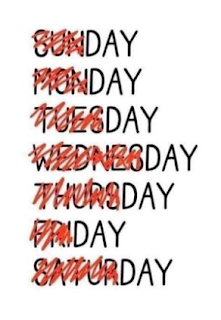 shared from the Dumfries and Galloway community website by a friend. Actually, I saw lots of amusing things on twitter and facebook today but you can go and hunt them out for yourself.

This sums up the week quite well. Not and entirely strange phenomenon  in my life, ad the school holidays tend to be like this anyway, especially the Summer holidays. But never in 'term time' - and the Spring Term 'ended' today.

I 'zoomed' a couple of piano lessons to private pupils; after the shambolic series of emails from The Office cutting off teaching 'their'pupils I've moved my attention to the private ones. I'll issue invitations to a few more next week, and increase the teaching after Easter, (DV, as the nuns always said when making plans for the future. Or even for the morrow)

I wrote the last post on Wednesday morning; I've done a fair bit of this and that since then.

His first Grand Engineering Success was to fix the shredder. Did I mention that a few days ago (maybe at the beginning of the week? - it's not important, anyway), I sorted through my stacks of bank statements and hoard of receipts which were overflowing out of their 'temporary' to-be-filed-basket. Dating back, in some cases to 2006. At least they were in date order. I filled a carrier bag with ready-to-shred, and He ordered a shredder.

Now, let me make this clear - I have barely used it, maybe just three pieces of paper. He has been in charge, and shreds away in small batches, ensuring that the machine is looked after tenderly and compassionately. It rewarded him by refusing to work after about three days 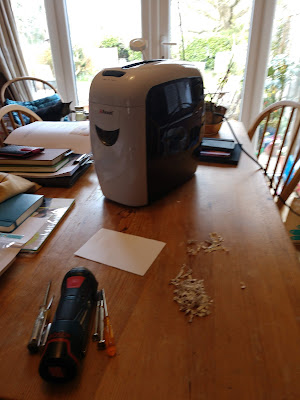 It took a while, but having assembled all the necessary tools and torches, with the exception of the right-angled tweezers which are currently in a Safe Place, he resolved the problem, extracting several large handfuls of paper shredlings reduced almost to dust. For those of technical bent, I can tell you that what happens is that the paper heaps itself up inside, long before it is full, and the top of the heap manages to involve itself in the shredder blades in the most unhelpful way. The important device for curing the problem was the cheap and tacky screwdriver, which is now stored near the shredder. Just in case.

I spent a chunk of the day watching drawing tutorials on youtube resulting in several more pages of sketchy stuff. One was a tutorial on sketching people to populate quick sketches; 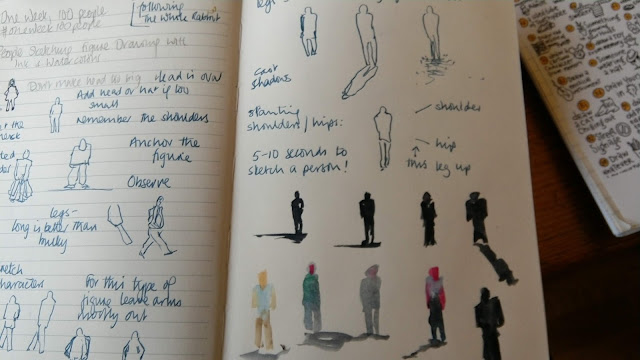 The line drawing examples were fun, and interesting to do, but I really love the water-colour versions, which use the same construction. What I would really like to be able to do is add features - so, I searched for another tutorial. Oh my word, it turned out to be very straightforward, nothing like as complicated as I thought. You just rough out the basic shapes (circle and triangle), add the guidlelines and get going. Current efforts look very naive - teenagerish - at the moment but I shall peservere. 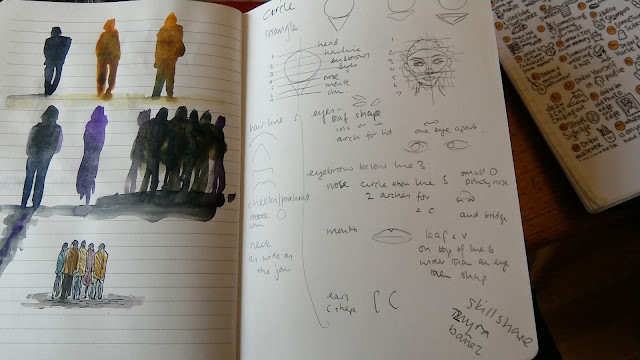 The starfish are copied from a page in the Almanac I bought myself at the beginning of the year. I haven't disovered the relevance of starfish to April. On Wednesday evenings I usually go round to a friend's and we eat cake and do crafting - sewing, nitting, drawing, whatever is on the go. So on Wednesday we 'zoomed' eachother and carried on as sort of usual. 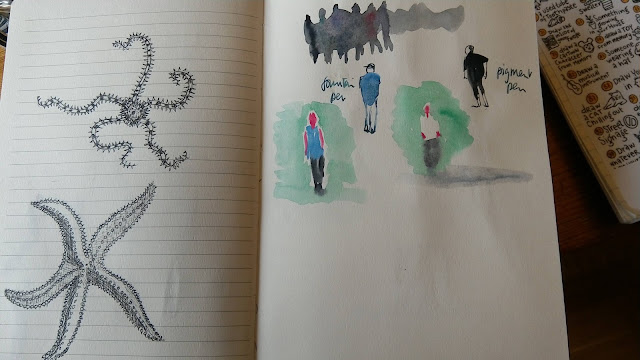 While I was teaching, He went out foraging. Waitrose was even more organised than the last visit, and people better behaved. Well, they were mostly well behaved last time apart just a few impatient idiots pushing through, getting too close, hustling about. This time they have improved their already good queuing system so that the social distancing was more clearly marked out. Most of what we wanted was there - fresh fruit and vegetables not as abundant as last month but that's hardly surprising, as some much of it was imported in the past. We don't seem to be going without, and He was able to get a few 'bonus items' for my father which their visiting grocer wasn't able to supply.

Today I potted on pansy and parsley seedlings from little freebie kits from Marks and Spencers. I hope I haven't done this too early, but they were getting very tangled in their little starter pots. 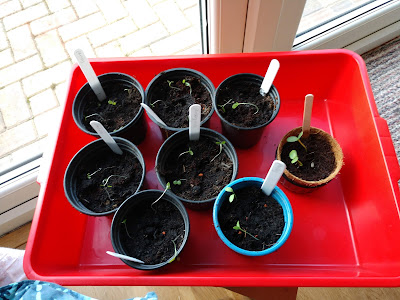 And I tidied corner by the piano, emptying yet another bag of 'stuff', while completely ignored by Leo, even when I kept moving the chair. 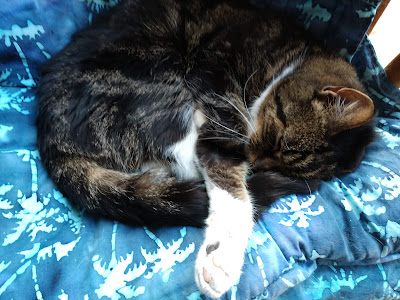 Writing about seedlings reminds me that the sweet peas are still outside - at ten past eight, I outght to get them back in.