Every day since Monday I have been out walking around the streets nearby. I have a new gadget - I keep calling it a 'fitbit' but that's like calling your Miele vacuum cleaner a Hoover. It's a Garmin something or other, all connected up to my mobile phone by some kind of telepathy. 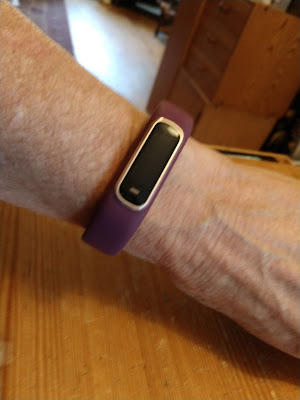 In some ways it is a ridiculous extravagance, and in others a brilliant purchase, as I am very motivated now to clock up the steps and go out for a walk - oh I'm bored, I'll just walk a little way up the road and take my mind off that packet of crisps which keeps singing out 'eat me, eat mee'
I set low goals to begin with - 2000 steps, and increased it little by little to 3500. I'm moving up to 4000 this week!
It also measures heart rate, and attempts to measure Oxygen sats but that last seems very optimistic - I will be gasping like a landed fish, and the finger monitor say 77% (which is very very low!) and the wrist band reads 92%. No, I don't think so!
The point is though, walking everyday has completely revitalised me - I feel less 'bleah', no longer stuck in a sort of foggy misty doldrum. I've also been focusing on how I breathe, as the oxygen machine is only effective if I breathe through my nose.
We've done tests over the same route - me on my own, me carrying the oxygen machine, me with Best Beloved carrying the machine, and I've been keeping records. It is abundantly clear to me that I am improving in how far I can go, with and without the machine, in just one week. So exciting!
What else...
I have the most perfect morning schedule going at the moment; first of all a tray with breakfast and my mobile phone arrives; 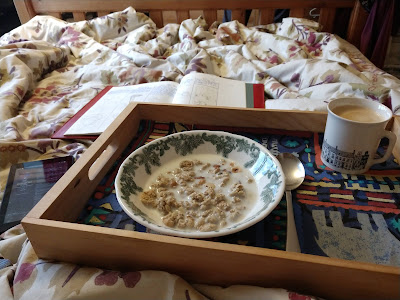 and I look through the news on my phone while listening to BBC Radio 3.
Then I do the Bible reading for the day - don't know how long that will last - I have a track record going back many decades of starting a 'daily this' or 'daily that' and giving it up after a couple of months. It does give me an opportunity to ponder and pray for things - family, church, and the unimaginable disaster in Afghanistan, and not only Afghanistan but in other areas of the world. I am astonished that people are still behaving like barbarians everywhere in the world - well, no, I'm not astonished. Just deeply, deeply sad. A mixture of prayer, and donating to various organisations, is all I can offer. Today's reading were a Psalm, and a couple of chapters of Ecclesiastes which kind of summed things up.
.............
Then I do a quick drawing. Here is the view out of the bedroom window of the birds gathering on the TV aerials for their morning briefing. 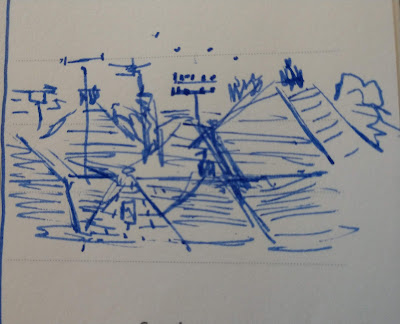 At some stage the cat will join me; 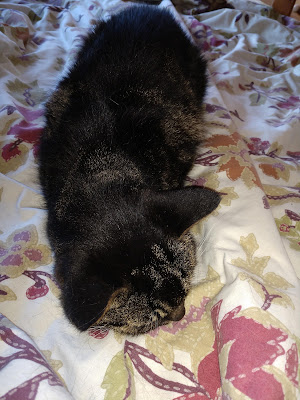 And then I will get up. This is a great start to the day!
I've finished knitting the greeny-blue vest, or sleeveless top, or slipover, or whatever it is going to turn into, and yesterday I cut and sewed the armhole steek on one side. I have practiced steeks on the teacosies, and also on a swatch of the sleeveless top, so I felt fairly confident.
I did two lines of sewing either side of the cutting line (marked in white) 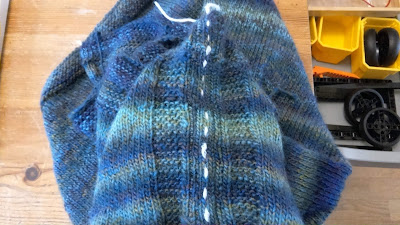 Then came the scary part; this wool is a lot more unravel-ry than proper shetland wool. 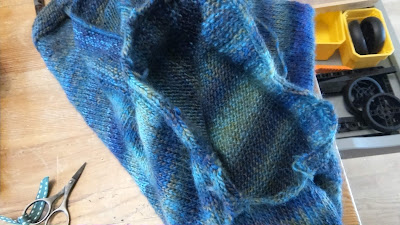 sewing down the cut edged was finicky work, so I paused in the middle for a mini croissant or two 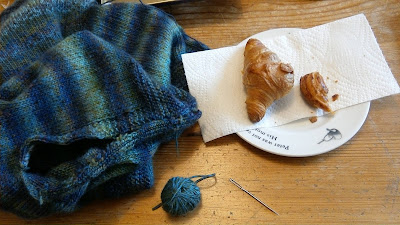 Sewing and croissants were finished at about the same time. 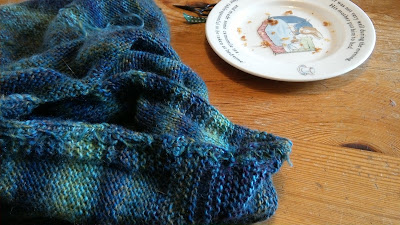 It's looking pretty good. I am waiting for the exact combination of time, mood, light and inclination to all come together to tackle the other armhole. Then I have to do something about the weird bits around the neck where some stitches have become very loose, and it is all finished. No seaming, as I did a clever 3-needle bind-off for the shoulder seams. Hooray!
Lastly, I've been living dangerously by doing some watercolour thumbnails while sitting on the sofa; 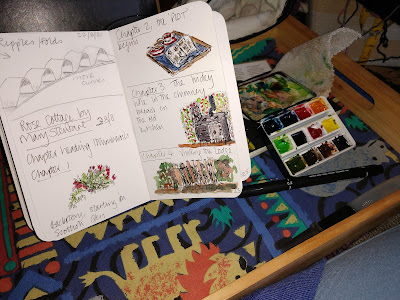 I'm using a waterbrush rather than pot of water which keeps things slightly under control!
Now, it's time to assemble a pot of tea... 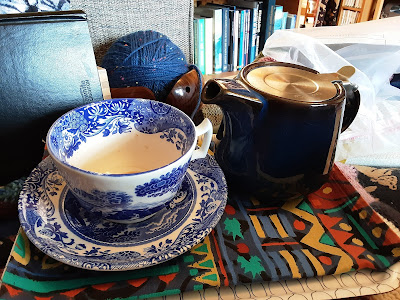