At the moment I'm on a roll; I am reaching my step count most days (having adjusted it to something more attainable) and going for a walk most days.

Here's where I went today: 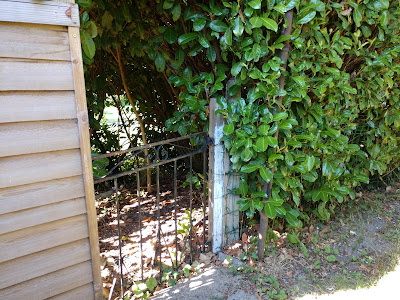 Like everyone on this side of our road, we have a back gate giving access onto a network of footpaths and public open space. Access to some of it has been under threat while the council tried to persuade us all that putting several thousand houses on the council owned golf course bordering this space was in everyone's best interests but for the moment the land is saved.

We have deliberately created a concealed access, so most people waking, jogging or cycling past wouldn't notice it; we have surprised a few as we suddenly appear from the thick undergrowth. First you make your way along the top of the bank, near the fence and ducking beneath the hedge 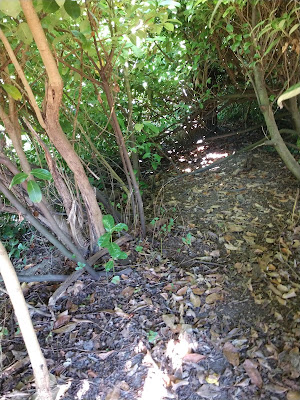 then you cautiously push through the branches and brambles, clinging on to the branches to descends a slope that becomes slippery after rain 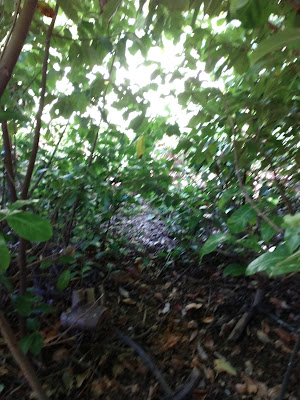 and emerge, blinking in the strong afternoon sun. 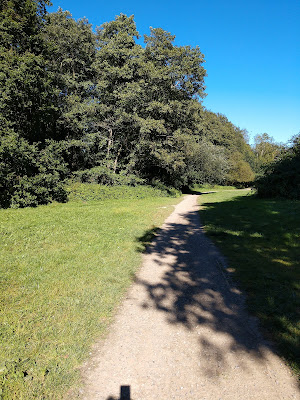 This path is popular, but not crowded. It is a cycle track, dog-walking route, jogging route and just 'let's get out for a bit of fresh air' route. The houses are on the right, up the 2 metre bank (I would have said 6 feet, but Boris Johnson has this mad plan to make us all use imperial measurements again). To the left, through the trees, are a couple of shallow streams, with just enough water to trickle over the stones.
We call this 'The 'Ricketty-Racketty Bridge'; when we first arrived it was an unstable wooden affair, and we used to play out the story of 'The Three Billy-Goats Gruff'; the children crouched under the bridge, dipping the hems of their coats in the water pretending to be trolls and leaping out with terrible shouts as we innocently walked across. 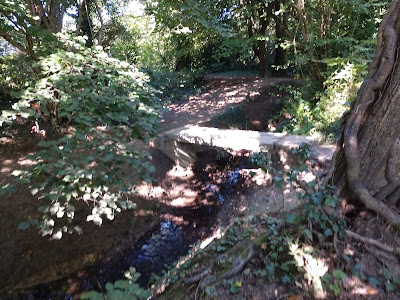 I followed one of the tracks though the woods and came out in a corner of a meadow. There is a bench, but it was already occupied - it usually is. Teenagers 'hanging-out', parents and toddlers having a half-way snack, someone reading or scrolling through their phone. 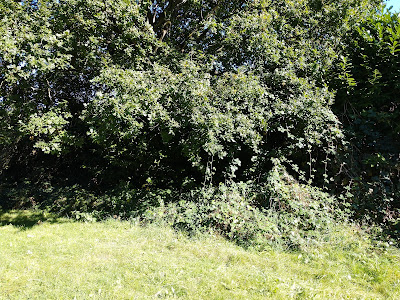 I went as far as the golf course - everyone knows what golf courses look like - crossed over the fair way when no-one seemed to be actually hitting a golf ball in my direction. There were a couple of players in electric golf buggies circling round each other, as though limbering up for some kind robot wars tournament at the fifteenth hole. I waited to see if they would start jousting using golf clubs - not today.
So, I went back through the woods along a different path until I reach the bridge again 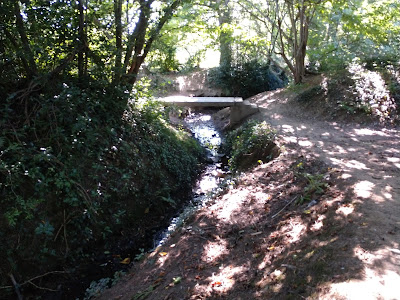 You can see the gully is 2-3 metres (7-10 feet) with the sweet little stream meandering through. When the children were young we used to wade upstream as far as we could, pushing through obstacles, scrambling up the banks. Don't be fooled by the tranquillity; every Winter, when there's been enough rain, the stream becomes a broad, dangerous, turbulent, fast-flowing river, rising up and over the banks in a matter of hours and flooding right across the cycleway you saw at the beginning.

The run-off from building one thousand houses on the golf course would all have down come this way, choking the bridge downstream, roiling up over the main road and into the houses along the way.

We've a few months yet before we'll wake to that sight again.

Email ThisBlogThis!Share to TwitterShare to FacebookShare to Pinterest
Labels: walk