Friday October 1st - A week is a long time

I've been on the new tablets for about three weeks now, and the difference is staggering. It's not just that I can walk further when I do the 6 minute walk test, but it's the whole experience of steeping out along the pavement. At the end of 6 minutes I have walked nearly half as far again, and although I am breathing hard - too hard to talk - I'm not gasping like a fish out of water, struggling to get the air into my lungs.

I can now walk fast enough to keep warm! There's a novelty! I used to make sure I was wearing enough layers in order not to get cold.

The new blood pressure tablets are also doing their job - too efficiently, it seems. Gone are the puffy ankles that I was getting in the afternoon - hurrah! - but I am constantly feeling just a little bit woozy - as though I was in a boat, gently rocking on a calm pond. Luckily I take another blood pressure medicine as well, so, following a quick telephone consultation with the clinic I am experimenting with reducing it over the next couple of days.

It is an extraordinary feeling, this sudden return to walking freely, no longer preparing for changes in gradients along the almost flat roads around where we live. Going for 'a walk around the block' takes thirty minutes instead of nearer fifty minutes. If I sound excited, it's because I am!

Anyway, enough on that topic - what else?

I have hopefully averted a minor domestic crisis - running out of yoghurt - by making a batch of home-made. Reading the Tracing Rainbows blog today reminded me (that apple loaf recipe looks good too!).

Here's the recipe I use followed by a couple of recipes. 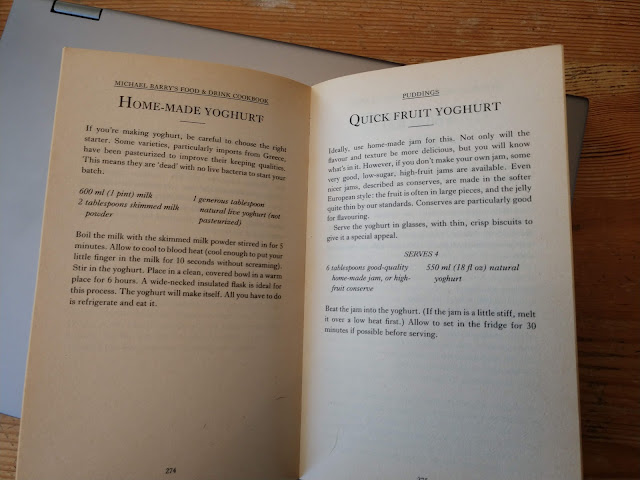 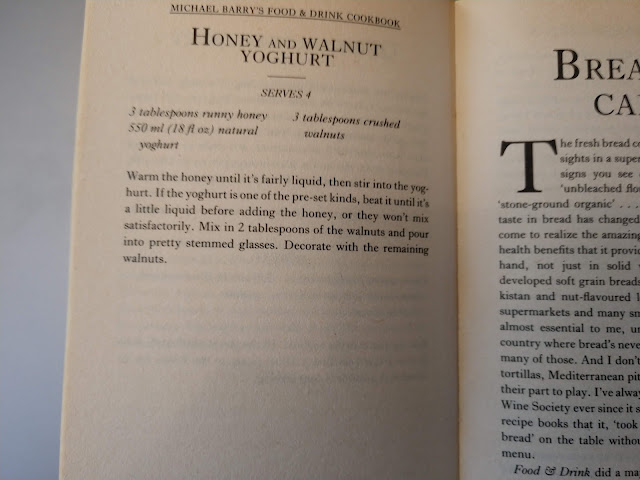 I now have a food vacuum flask full of the cooled milk and yogurt mixture hopefully doing what it is supposed to do; I shall look inside tomorrow morning. Another excellent topping for yoghurt is brown sugar, the darker the better in my view.

These pages come from a book called 'The Crafty Cook', written by Michael Barry. I have just googled his name, and discovered that he died in 2011; reading his obituary  I find that also had a career as one of the founding members of Classic FM - well I never did. We always watched 'The Crafty Cook' on television. It is where we first encountered Jilly Goolden and her enthusiasm for wine.

The state of the dining room table has been a recurrent theme in this blog; on Monday it became truly spectacular when we woke up to discover the boiler in the kitchen had been leaking overnight, and the work surfaces and floor and under the washing machine were all properly wet. Everything was decanted to the dining room all in a hurry and the engineer called out. Meanwhile the carbon monoxide detector started its plaintive beep - I'm sure that was just a coincidence. 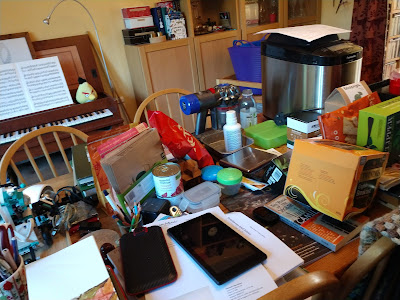 He appeared later that day, took one look, stuck a 'danger, do not turn on appliance' notice on the boiler and started ordering parts. He came back the next day and spent the morning dismantling the boiler, fitting great complicated contraptions and then testing everything. Success - all done and he left by lunchtime taking his notice with him. We couldn't persuade the detector to stop beeping so banished it to the shed, pending the arrival of the replacement.
While the engineer was roaming around between the loft and the kitchen and everywhere in between, I stayed out of the way in the dining room, turned my back on the chaos and did some messing about with the paints. 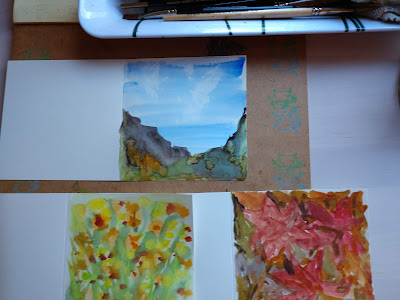 If all works out these will be greetings cards, once I have sorted out the splodges of colours using pen and ink. I'm hoping I will have a seascape, flowers, and autumn leaves, but I won't know until I have finished whether I like them. That's kind of annoying, freeing, and interesting, all in one go.

I'm still doing the 100 day dress challenge... today is day 28. I've put on an extra layer because it's Autumn - just enough to not need a fleecy jacket.

It certainly makes getting up in the morning simple; fresh underwear, current 'legs' and the dress. I have ordered some tights from Snag tights to make a change. I can't tell when they will arrive because I suspect I mistyped my email address on the order form. I very nearly succumbed to the idea of  the 'care bear collection' and also to the 'duo collection' where the legs are wildly different colours...