Public Service Announcement Number 1- don't put all the baby stuff into the loft - make your save/skip/recycle/give away/sell to someone else decisions before you consign things to the oblivion, grime, dust and damp of the loft!

But I expect all you sensible people out there knew this already.

We have rediscovered hundreds of photographs going back to when - when - we don't know yet, as we haven't been through them.

Public Service Announcement Number 2 - deal with photographs sooner rather than later. Photograph albums. Storage Boxes. And write details on the back! 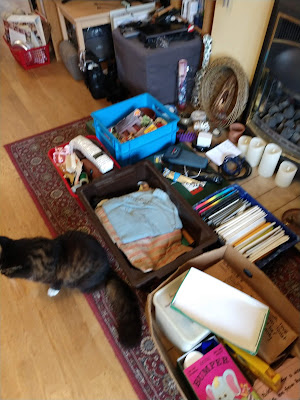 Also my old Sindy and Madge (Barbie's best friend) dolls and clothes, a collection of dolls in national costume, books, trinkets, unused wedding presents, cookery books, all to be sorted into crates ready for their next destination. Regrettably that will be recycling or bin for very many of them, but I will salvage and redistribute whatever can be saved.

As you can see, McCavity is deeply unimpressed with the piles on the hearth rug. It's tough, being a cat and having so little say in the running of the household.

It is so true, that accumulating clutter becomes overwhelming in time, and induces a feeling of helplessness at the very thought of doing anything about it.

Well the skip has gone. I'm regretful about somethings we skipped, embarrassed about others, which should have been recycled or moved on before they were ruined, but mainly relieved that we have made so much progress in dealing with a task that I was dreading. 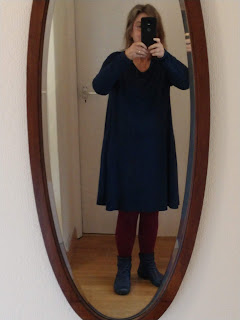 I am still so happy with The Dress! Sixty-five more days to go. I bought some new tights - finally gave in to all the 'wow' reviews of 'Snag' tights and bought some - they certainly live up to the hype.