I'll leave the title because I don't know what this is about, except this and that and the other...

I would have shown you a photograph of the mindless shawl I was knitting, but I overdid the mindless-ness and even I couldn't put up with that many mistakes. So I spent an evening ripping it out and re-winding the yarn (not wool, acrylic) and started again with a different mindless pattern - a diagonal scarf. Part of the problem with the original effort was that the yarn would not move easily along the bamboo knitting needles. I'm now using resin needles and that makes everything more enjoyable.

I'm putting a marker in the knitting at the end of each day - it pleases me to see the progress... it also helps me know which side is which. 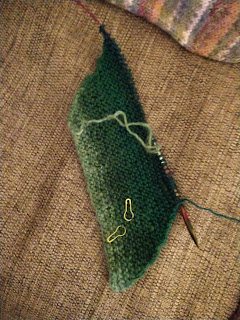 (5.5mm needles, double knitting yarn. Cast on 40 stitches or however many you want. Knit the first and odd numbered rows; for the even rows, K2 tog, knit until one stitch remaining, increase by knitting through front and back of the stitch. Stop when long enough) 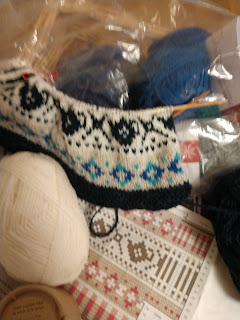 I have also cast on another teapot cosy for a friend. To be truthful, this is the third time I cast on. Somehow I couldn't get past the first couple of rows of ribbing without making an unrecoverable mistake. The first time I thought maybe using a dark colour was the problem, so I tried again with the light blue. Finally I gave in and used the dark colour to make a garter stitch border.

We went round to a friend for coffee in the garden. She always brings at least two kinds of cake and biscuits when she comes round to us, but I didn't have anything respectable to take with us. So I took my kitchen windowsill lettuce leaves. 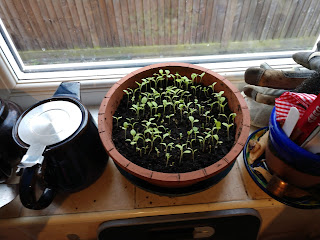 Taking biscuits would have been coals to Newcastle - she had already made a marshmallow chocolate biscuit fridge cake and opened a packet of shortbread biscuits!

I sowed another trayful when I got home - here they are after five days; 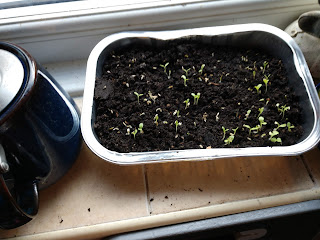 Today I have planted garlic bulbs, and harvested all the cucamelons. I realise now that they were still unripe when I tried them some time ago. Now, they are slightly crunchy to bite into, with a mild juicy slightly citrus flavour. (The strawberries just happen to be in the picture - they are not from the garden, but waiting to be a part of supper). 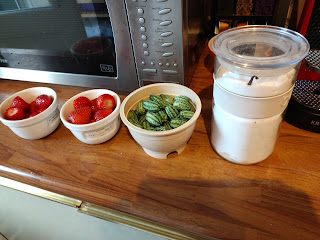 The strange black object sticking out of the sugar in the jar is one of several sticks of vanilla that live in the caster sugar. This was something my mother taught me - she always stored the vanilla sticks in the sugar. The perfume when you open the jar is amazing!
I was baking Nigella Lawson's 'Mine-All-Mine salty chocolate chip cookies' this afternoon and took the opportunity to refill the sugar jars - light brown, dark brown, caster and granulated.
You are supposed to used all the dough to make one giant cookie, or two smaller ones. I made four; leaving out the salt flakes, and replacing the chocolate chips with walnut pieces, because why put salt on your chocolate cookies, and also because of  what was, and what was not there in the store cupboard. 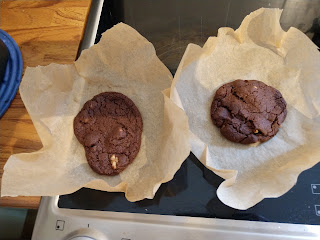 The consequences of clearing the loft continue. I was very glad to discover not only an apparently unused Parker pen, but also a box of cartridges. It is a slimline pen, so perfect for pocket in the diary/notebook I carry round with me. 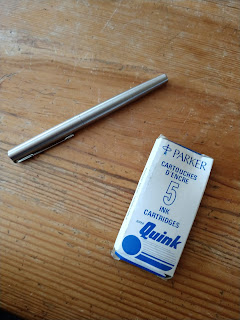 McCavity was trying to make the best of the boxes still waiting for attention. That's the box with my 'dolls in national costume' and three sweet little blankets from my doll's cot on top. I think they were hand made for me, but I don't know who made them. Anyway, McCavity wasn't impressed and gave up quite quickly. 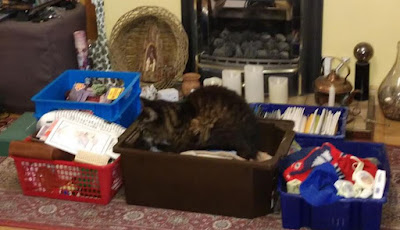 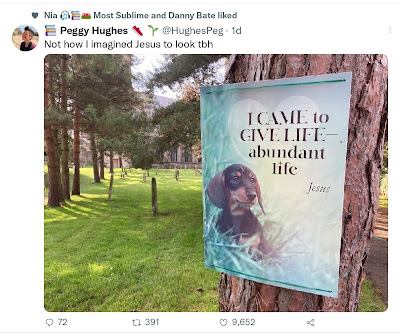 Actually, that verse has been one of the 'hooks' that I have held on to ever since I found out about having systemic sclerosis twenty years ago now, and has helped me stay positive - but every so often someone comes up with an 'inspiration' poster which is more than faintly ridiculous - unless you love dachshunds?
Posted by KirstenM at 21:09:00