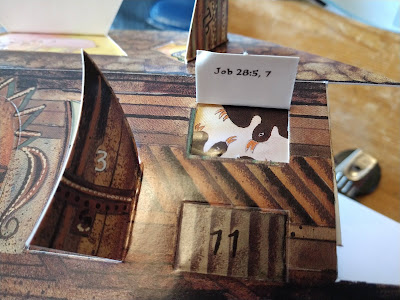 'As for the earth, out of it comes bread; but underneath it is turned up as by fire. That no bird of prey knows, and the falcon's eye has not seen it'

Looks more like a blackbird to me, but let's not be too picky; if I tried to draw a falcon it would probably look just like this.

I'm more interested in the first part of the quotation; 'out of it comes bread'.

Experiments with bread making are still under way. While I was looking up youtube videos about satin stitch (try this one for starters) I tripped across this one for making bread without using the oven, and now I can't find it anymore which is ridiculous.

I've just had a go at it myself, and can tell you what I did;

I used my usual recipe for no-knead bread, reducing quantities slightly because - I don't know why I chose to do that. Anyway I used 12 ounces of  strong flour and about 3/4 teaspoon Doves yeast and 3/4 teaspoon salt and enough warm water to make the dough. It was fairly wet compared to traditional dough - what they call 'shaggy'. I mauled kneaded it in the bowl for a couple of minutes, and left it to double in size.

Then I tipped it out onto a floured board,- very sticky, but a floured spatula overcame all resistance - gave it a good sorting until it became dough again, cut it into seven pieces and rolled them into balls.

Next; arrange them in a non-stick heavy pan 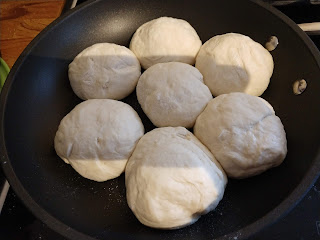 cover, and leave for half an hour. I'm glad I oiled the inside of the lid. You will be too. Cook for 15 minutes, covered, on a low heat - I noticed the setting for the hob in the video was 5, so did the same.

This is what it looked like. Now here's the tricky bit, you have to flip it like a pancake, no, not like a pancake. Using oven gloves(!) hold a plate over the pan, tip it over, so that the bread is cooked side down on the plate, and then persuade the whole thing back into the pan. Hurrah! This looked very promising.

Cover and cook for another 15 minutes. 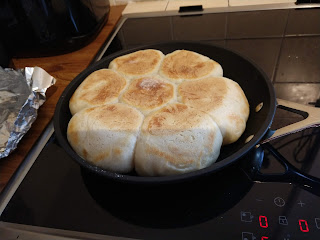 After which time it turned out, when I turned the bread out, that I had burned the bottom slightly. 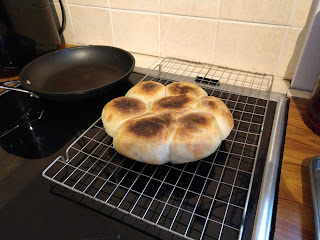 It still looks plausible. We shall find out at suppertime.

It is as I thought; the reason why the strawberries didn't do so well last year is that they were infested with vine weevils. I had my suspicions, and when I upended the pot into an old dustbin lid to take a look I saw that the soil was packed with little fat corrugated white grubs curled up nose to tail. I've disposed of all the soil into the garden waste bin where I hope they will meet their end, and shall invest in nematodes. 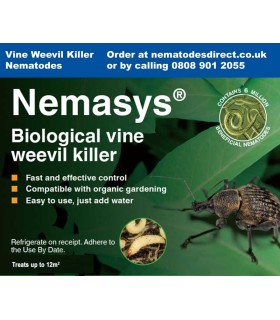 What a brilliant name for the stuff! You mix them up in a watering can and water your pots with it.
The goose grass is just emerging, but thanks to a major effort in the past two years there is hardly any - yet. I pulled every strand I could find, early in the year before it had a chance to flower and seed, and kept at it, and managed to discourage it from getting a hold.
The little rosemary bush by the back door has just started flowering. It is one I bought from a supermarket and planted up when the old one died last Summer.
More Noah's Ark;
yesterday; 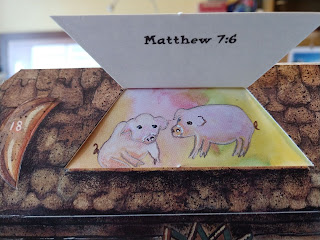 'Cast not your pearls before swine'
I've always enjoyed the quick wit of Dorothy Parker;

. According to the story I heard the other person was the glamorous socialite and playwright Clare Boothe Luce.

“Age before beauty” said Luce while yielding the way. “And pearls before swine,” replied Parker while gliding through the doorway. Is this quotation accurate and is this tale true?

Quote Investigator: There is more than one version of this story, and the earliest description does not refer to Clare Boothe Luce by name. However, the second oldest version does identify her and Dorothy Parker as the antagonists. Further, this version was written by the Hollywood columnist Sheilah Graham who claimed that she heard it directly from Parker in 1938.  (https://quoteinvestigator.com/2011/06/29/pearls-before-swine/) 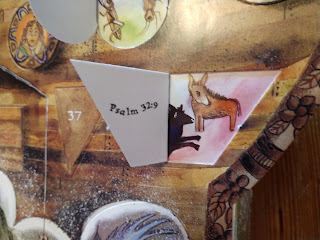 Do not be like the horse or the mule, which have no understanding but must be controlled by bit and bridle or they will not come to you.