I've decided to leave June behind me and start afresh.

Today I started sewing my picture for the June episode of 'the postcard project'. I have already received Ang's embroidery, here below; 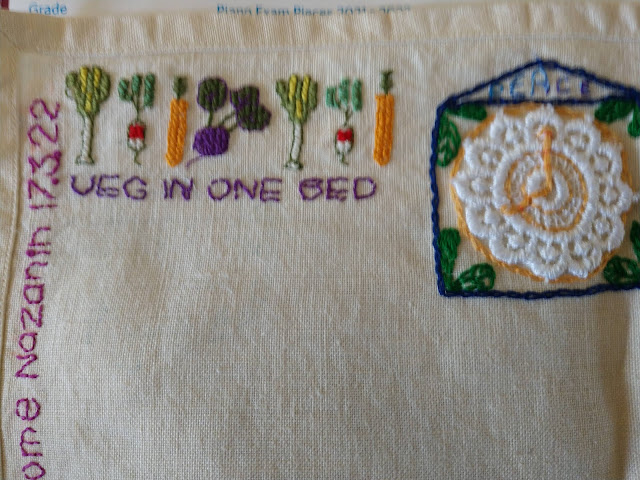 Ang has been following the month-by-month plan for growing vegetables in a raised bed, set out by Huw Richards in the book 'Veg in One Bed'. I thought I meant to follow the plan too, but things very soon went 'off-piste' for me. As usual, I am missing several prime ingredients for success;

I have had some success; broad beans, lettuces and potatoes. It wasn't blight that was afflicting my potatoes, but slugs and snails. Battle has commenced; my remaining sunflowers are all protected by copper tape or 'slug-wool', and I have pulled up the first of my garlic plants, a little early, to boil up into GARLIC WATER - apparently a sure-fire creepy-crawly deterrent. 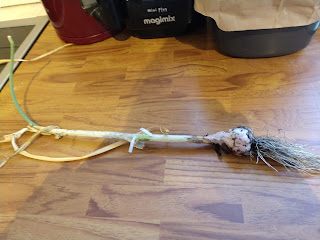 You boil up a whole bulb of garlic - I've cut mine up a bit to increase the surface area of garlic - in a litre of water until very soft and squishy. 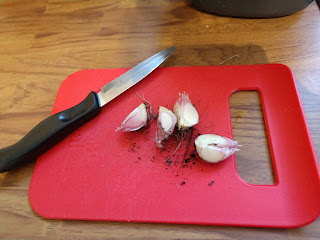 Then you strain the water, and squish as much garlic through as you can, pour the resultant liquid into a sprayer and set to work, spraying leaves. stalks, everything. The garlic-water was still too warm to use yesterday evening, so I went out slugging with a torch, but couldn't find any! Have I caught them all over the last two nights? Unlikely. Maybe it was too cold for them - certainly was for me.
I shall spray everything today, and see how the garlic scented sunflowers, and ready seasoned lettuces will fair in the coming week.
Recipes; my turn to cook lunch yesterday and today. Yesterday was a version of 'sausage supper' which came out very well - even if I say so myself. But it is a sure-fire success. (My word, I first posted that recipe in February 2012!)
Today I used most of a Wagama kit to make chicken katsu. But (there's always a but when I 'follow' a recipe) I used udon noodles instead of rice, and cooked the chicken in the air-fryer.
Now, if you have an air-fryer, breaded chicken becomes simplicity itself! I've always had a bit of a disaster with home-made breaded goujons of this that and the other, but listen, or rather, read,
you have one plate with a beaten egg, one plate of breadcrumbs (a couple of tablespoons per person), and a clean plate to put the finished chicken on. Then - magically - you stir a bit of vegetable oil and seasoning into the crumbs, so that they are still crumbs, but slightly coated.
Do the chicken-into-the-egg-into-the-oily-crumbs bit, and dump each one onto the plate as go.
Arrange in one layer in the basket of the air-fryer, zap at around 190 for around 12-14 mins. That was easy!
Also crispy kale - dribble a bit of oil and salt on your kale, stir it in with your fingers so everything (including your fingers!) is coated, and zap at 180 for 4-5 mins. That worked too!
The kit was a bit of a swiz - aren't they always? - but was helpful to give me an idea of taste and consistency. You supply your own veg, chicken, coconut milk.... the kit had a sachet of katsu paste, a sachet of salad dressing and a sachet of breadcrumbs. (Per favore, No comments required about plastic waste, grazie. I've recycled most of it.)
Dulingo Italian continues well. Mangio pollo su un piatto.So far, so good ...
Ciao
Posted by KirstenM at 14:14:00