The weather's been cold and tricksy this week - sitting inside in the sun, you would think that it was a lovely day out there, but the reality is it has been COLD. I've been caught out a few times, and then, a few times, I've dug out my winter lined trousers and worn a vest and then BOILED.

I suppose that's what Spring is all about... I stand at the back door looking down the garden to the bench and table under the bare branches of the apple tree... time was when we would sit under the shade of the tree drinking chilled white wine and eating tapas and pretending we were somewhere more Mediterranean.

Anyway, here are about four posts all rolled into one - you can either read it all in one go, or practice some self-restraint and make it last.

So, what have we been up to? He hoovered the house Everywhere, and changed the filters and cannula on my oxygen machine.... We changed the sheets on the bed.... I cleaned the luvverly loo... - you know, houseworky stuff.

I wrestled (and lost) with a Goldberg Variation (just look at those time signatures - is that some kind of a JOKE? and he swaps them over every so often just for another laugh)

On Wednesday the children kept dropping the extremely expensive also xylophones so I bought some "tub-trugs" for carting the instruments from the school to the village hall next door where their lessons take place. They were too small for the xylophones, but just right for disinfecting two dozen recorders every week. So, on Friday, I bought another three larger ones. No expense spared. And a glove puppet for a big Whole School Samba Event that I will be involved in later this term. I'm hoping that the puppet will be able to teach two-and three- year-olds how to play samba. Maybe. Maybe not.

Today, one of the cats was all pestering and restless. I wondered if we had forgotten to give them breakfast. We had, but that wasn't the problem. Nope. She wanted us to go down to the bottom of the garden to make sure there were no dragons. Both cats are suffering at the moment as there are some new fierce cats around. Not for no reason is one of our cats nick-named Fraidy-Cat.

Anyway, it was briefly warm enough for us to go and do a bit of gardening. Himself to scare the "lawn" with a a savage looking rake mounted on two wheels which you pull and push and clank around with, accumulating piles of dead grass and moss. I think this is the first time we have subjected the grass to this treatment ever. I hope it appreciates the effort.

I carried on digging up the ground under the laurel hedge and replanted a couple more pots of bulbs in the hope that they will joyously burst into life again next Spring. The ones I dumped in the earth a week or so ago don't look too shabby

They were truly lovely earlier this year. 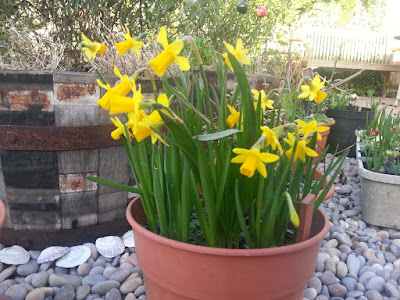 The garden is full of blue-bells this year - I didn't plant them, so how did they get here?

Anyway, after all that effort we deserved a cup of tea and cake. The actual cake we had with the cup of tea has gone, but I made another one for the photograph. I doubt it will last very long...

Melt 30g (a 1cm slice) of butter in a large mug in the microwave. Beat in an egg, 2 tablespoons brown sugar, 2 tablespoons cocoa powder, 2 tablespoons SR flour, 2 tablespoons porridge oats. Add a drop of milk if the mixture is stiff. The recipe that this is based on says cook for 1 minutes 20 seconds on high in an 800W microwave. Ours is more powerful, and I find 1 min is about right. This makes a sort of brownie-cakey sort of thing. And it takes about the same time as the tea takes to brew.

I use a large plastic mug which is really meant for heating soup.

Right. Himself, in his role of House-Manager is preparing tonight's supper (curry) and I ought to get this dining room table clear. It is covered in raps and chants at the moment, part of the planning for the Great Samba Project, There's "creative disorder", and "work-in-progress". And then there's "what-a-mess".